Did you know that apps that send out in-app notifications have up to 3.5 times higher user retention rate in comparison to apps that don’t. Hi I’m Caroline Craddock, I’m the visual designer here at Pulsate and today I’m taking this week’s episode on in-app notifications. So lets get into it. 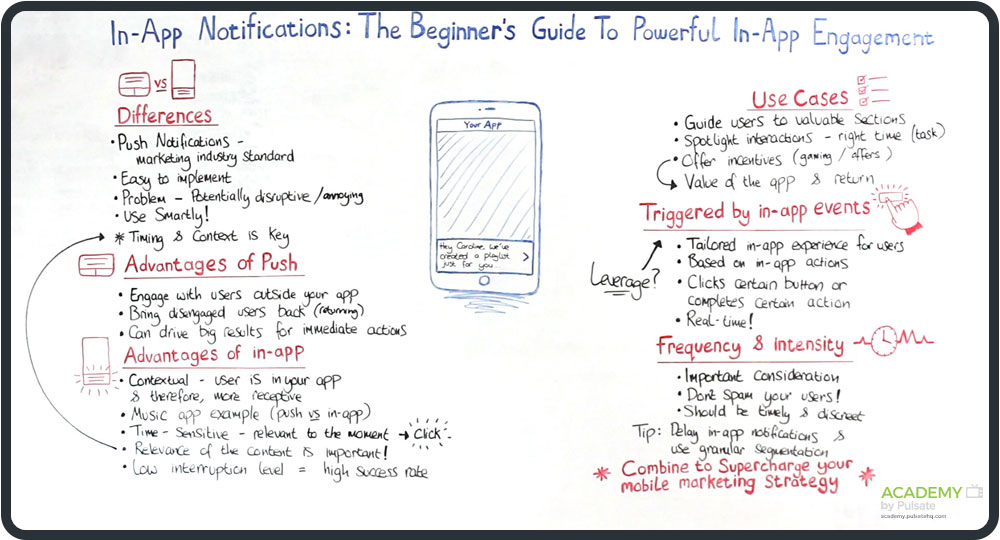 Here’s a still of this week’s Academy whiteboard. Click on it to open a high resolution image in a new tab!

I’m going to start off with the differences between push notifications and in app notifications. Push notifications have been around for quite a while and they’re often used by marketers because they’re an easy to implement marketing industry standard. However, they have the problem of being potentially disruptive or annoying to your app users if they’re not used smartly. Timing and context really are key for delivering really powerful push notifications.

Why use in app notifications? Firstly, they’re contextual. The user is in your app right now, so they’re going to be more receptive to it. Let’s take a music app for example. You want to send an alert about some new music that’s available. If you send out a push notification with this alert, it’s not relevant to that user’s context. They could be driving. They might be in a different app. Maybe the phone’s in their bag. You’re not going to be promised a good user interaction right there. Whereas if you use in app notifications instead it’s going to be delivered to the user the next time the user’s in the app, and it’s going to be more receptive to them and they’re more than likely going to click because it’s time sensitive and it’s relevant to the moment. Another thing to consider here though is the relevance of the content when you’re sending in app notifications. It’s a factor between timing, context, and relevancy of the content really create a good successful in app notification.

I’m going to go through some of the use cases now of in app notifications. You can use them to guide your users to valuable sections of your app at the right time. You can spotlight interactions that you want your users to perform. Perhaps there’s a certain task or an action that you want them to do. You can use in app notifications to highlight this. You can also offer some incentives. This would be good for gaming apps and retail apps. Maybe in gaming apps you want to offer them a boost, or in retail apps you want to offer them maybe a discount or a special offer. Overall, you want to create some value for the app users. You want them to realize what is in them for them through these in app notifications, and hopefully they’ll turn into returning customers then.

How do we leverage these in app notifications even more? Set them up so that they’re triggered by in app events. They become really tailored to in app experiences for your users because they’re based on in app events right now, what your users are doing in the app, or how they’re behaving. If the user clicks a certain button, maybe they complete a certain task, it’s all done in real time so it can be really effective.

One thing to consider, though, is the frequency and intensity of your in app notifications. You could do a great job of providing context, timing, the relevance of the content to them, but if you’re annoying them with too many it becomes annoying for them and they might delete your app. It’s a really important consideration. Don’t spam your users with these. Again, a really important thing to point out is they need to be timely and discrete.

That sums up today’s video. I’m Caroline Cradock, and I’d love to hear some feedback from you. If you want to, leave a comment below, or you can even follow us on Twitter. Shout out to us on Twitter @PulsateHQ. I’ll catch you next time.