Hi. My name is Rafael and I’m the Senior Android Developer at Pulsate. Today, I’ll be talking about the BBB, the big beacon battle between iBeacon and Eddystone. If you do not know what beacons are, Patrick already created a very nice video which explains the basics of iBeacons. So, let’s get into it. 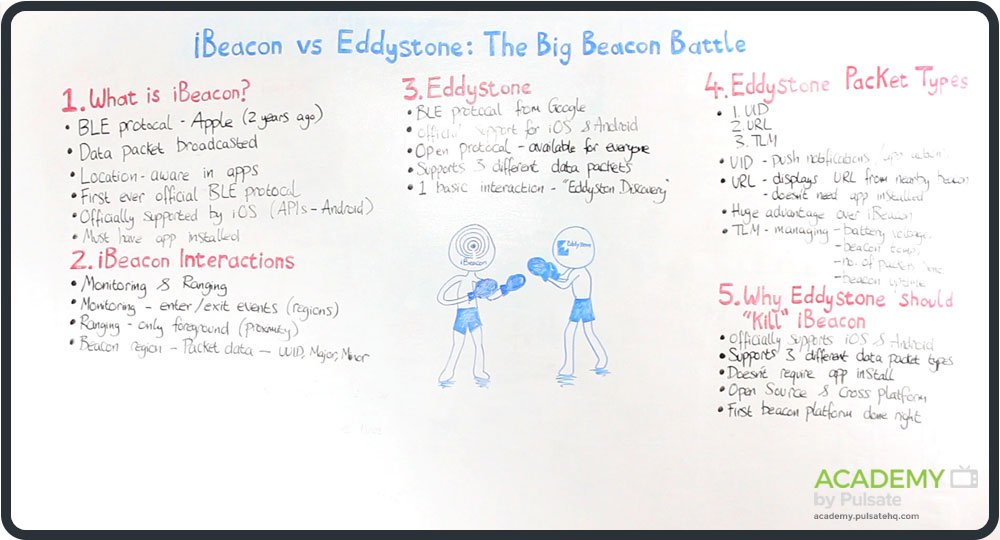 Here’s a still of this week’s Academy whiteboard. Click on it to open a high resolution image in a new tab!

So what is an iBeacon? An iBeacon is a Bluetooth low-energy protocol that was created by Apple and was released two years ago. It allows developers to create location-aware apps, thanks to beacons. It is the first official Bluetooth low-energy protocol, so almost every beacon supports it. It is officially supported only by iOS, but you can find many APIs that also allow Android to scan for iBeacons. If you want to be able to find beacons and to do any action with them, the user must have your app installed.

2. HOW DOES IBEACON INTERACT WITH YOUR APP?

iBeacon supports two basic interactions, monitoring and ranging. Monitoring. Whenever you enter or exit a beacon, your app will be notified about that. Monitoring works in the foreground, background, and also when your app is killed. Ranging, however, works only in the foreground and it provides you with proximity data. When we monitor, we monitor for a beacon region. When we range, we range an individual beacon.

3. WHAT ARE EDDYSTONE BEACONS?

So what is Eddystone? Eddystone is the Bluetooth low-energy protocol from Google and it was created in 2015. It officially supports both platforms, iOS and Android. It is an open protocol available for everyone. It is built to support three different data packets, which I will talk about in a sec. It supports one basic interaction, which is called Eddystone discovery and is a little bit like iBeacon ranging.

Will Eddystone be the iBeacon killer and why? Well, Eddystone officially supports both iOS and Android. It supports three different data packet types. It doesn’t require the user to have your app installed. It is open source and cross-platform. It is the first beacon platform that is done right and it is way more powerful than any previous platform.

That’s all for today’s episode. If you have any questions, please leave a comment in the section below. You can also find us on Twitter under @pulsatehq. If you haven’t subscribed, please subscribe now and see you next time.

Geofencing vs Beacons: 7 Differences you need to know

10 Things About Bluetooth Beacons and Your Mobile App You ...